Two NGG 16 locomotives, Nos. 110 and 112, manufactured by Beyer Peacock built in 1939, have been resting quietly at Ratanga Junction, a theme park on the outskirts of Cape Town. As a result of negotiations with the owners of the theme park, the two locomotives have been repatriated back to the Sandstone Heritage Trust in the Eastern Free State for restoration. The shopping centre requires a number of static exhibits and the Sandstone Heritage Trust will supply these during 2006.


We would like to commend the management of Century City Property Development (Pty) Ltd the owners of Cape Theme Parks (Ratanga Junction) and especially Mr. Greg Deans the MD and the Board of Directors
For their broad-minded approach to this situation. Locomotives that have sound boilers should be brought back to steam, while locomotives that are no longer capable of being restored should be allowed to end their days in dignity as symbols of a bygone era. All these alternatives escape the cutting torch; which is something that no steam preservationist is prepared to countenance.
We would like to thank Target Crane Hire, our drivers Leon Flynn and Arno Serfontein, Andy Selfe who took time out to come and assist, and all the other people who made this move possible. Taking big locomotives out of the centre of an active theme park is a difficult challenge. 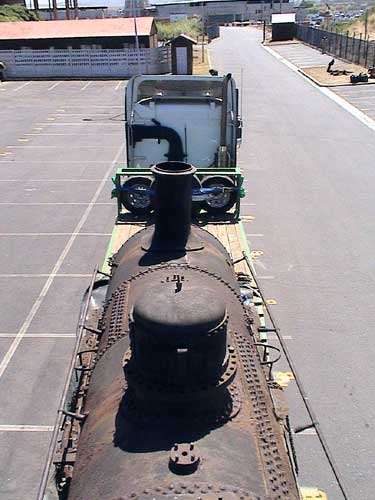 A look from the crane above