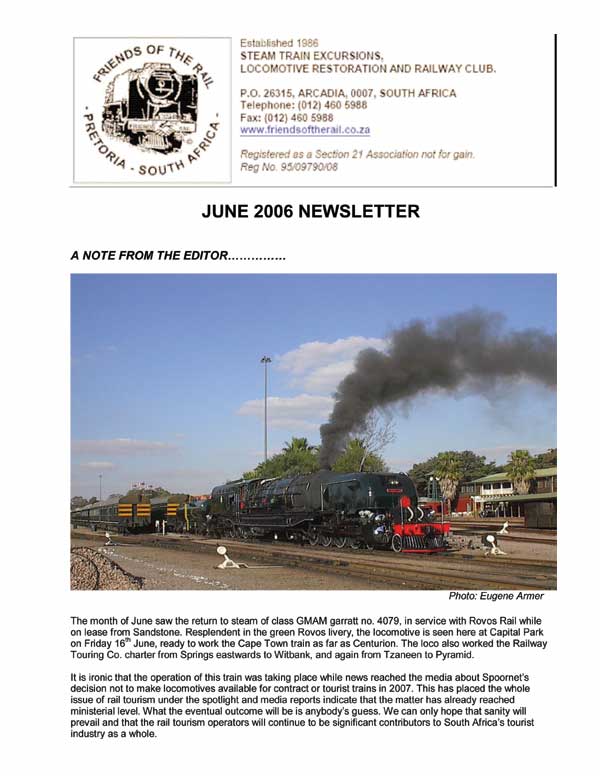 !UNE 2006 NEWSLETTER
! #$%& '($) %*& &+,%$(-----
Photo: Eugene Armer
The month of June saw the return to steam of class GMAM garratt no. 4079, in service with Rovos Rail while
on lease from Sandstone. Resplendent in the green Rovos livery, the locomotive is seen here at Capital Park
on Friday 16th June, ready to work the Cape Town train as far as Centurion. The loco also worked the Railway
Touring Co. charter from Springs eastwards to Witbank, and again from Tzaneen to Pyramid.
It is ironic that the operation of this train was taking place while news reached the media about Spoornet’s
decision not to make locomotives available for contract or tourist trains in 2007. This has placed the whole
issue of rail tourism under the spotlight and media reports indicate that the matter has already reached
ministerial level. What the eventual outcome will be is anybody’s guess. We can only hope that sanity will
prevail and that the rail tourism operators will continue to be significant contributors to South Africa’s tourist
industry as a whole.
- 2 -
WHAT’S BEEN HAPPENING……………
The monthly meeting on Wednesday June 14th was attended by about 20 members. After a short special
general meeting to approve the budget for this financial year, those present enjoyed a video presentation by
Chris Janisch of steam in motion over the past 12 months. Thanks Chris, a great show!
----------
HO MODEL OF THE NEW SITE
Steve Appleton reports:
Cellphone pics taken last night (11th June) of the Hercules 1:87 HO site model kindly being built by Chris
Becker. He has done an excellent job in my view. When completed and professionally photographed, this
certainly will provide a concrete depiction of our dream that will help to sell our cause (and raise money and
convince Spoornet to allow us to relocate some trackwork, etc). Still to add are some fine details, like grass
and trees. The representation of the existing buildings and the relocated CSAR shed from Pretoria station
number 1 yard are stunning.
In the model, Chris has stabled clerestory coaches on the platform, but in practice this road should normally be
empty, except for departing or arriving trains.
Cheers,
Steve A
----------
FATHERS DAY HANDS-ON E